The Wii U, Switch, & the Short Life of Asymmetrical Multiplayer

Dang, if we only got asymmetrical multiplayer, I’d be so happy right now.

In my last article about how I accidentally predicted the future of Nintendo’s home consoles when I was sixteen, I talked about the way that Nintendo pretty quickly moved away from some of the ideas I was most excited for, abandoning the Wii U to die and in effect turning the Nintendo Switch into what may very well become their highest-selling system ever (perhaps behind the DS).

Just a week or so after I posted my original idea about a dream system, Nintendo’s next console was leaked in a drip-by-drip fashion by way of the Project Cafe codename. Details of a touchscreen controller, all-new online multiplayer functionality, and mixed signals on technical specs wreaked havoc over the internet for a few months until E3, when the Wii U was finally unveiled.

In that time, I did a ton of speculating about what a touchscreen controller could really do. Stuff like Pokemon Snap with a gyroscope and controller being used for a camera was a no-brainer, as was sports games using the second screen so you could hide what plays you were running from your opponents. Local multiplayer would forever be changed by way of asymetrical gameplay, and I was floored by the concepts I thought of. While I wrote about some way-too-ambitious video game ideas in a post at the time, there is one that stuck out to me as a must-have that never ended up existing: an RPG assistant!

Roleplaying. It’s a hobby that many take up every weekend, and it is the tabletop game that inspired video games like Dragon Quest and Elder Scrolls. But nobody has ever been able to replicate the scope of a tabletop RPG and put it in a video game. It’s always just been too hard to let a person make up any world and story that they want in a game: until now.

This Project Cafe game wouldn’t try to replace regular Roleplaying, but merely supplement it. Battles, enemy/NPC data, and character sheets would all be on-console, now because the controllers can stream data to each controller separately: players can write secret notes to the GM without notifying the other players, and players can even go on their separate side-campaigns without completely interrupting the other players.

The GM get even more tools at their disposal: with the touchscreen, it is now easier than ever to create new monster types, characters, towns, and much more, all during the roleplaying session! Tactical planning and maps can be onscreen now, saving you money because you won’t need to buy miniatures anymore! The social experience of Roleplaying will still be the same, but now with Project Cafe, it will become even easier and much more accessible to outsiders that don’t want to have to buy and learn with a rulebook.

We’re at the point where smartphone technology is advanced enough to do all of the stuff here, but it baffles me that the Wii U never released what could have been its killer app: a combination of couch multiplayer and live in-person tabletop gaming.

One thing that killed a lot of these ideas, and you can see it written here, is the fact that the system could only handle one Gamepad at a time. There was talk of allowing a second Gamepad, but no games ever implemented it and the concept faded away. But even with just one controller, the game still could have worked! It just… never happened.

In fact, asymmetrical multiplayer didn’t go much of anywhere in the end. 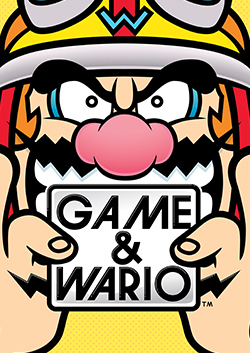 Nintendo Land and Game & Wario were practically the only games that attempted any sort of use of the Gamepad for multiplayer purposes. Both were actually very fun!

In Nintendo Land, there were several multiplayer modes, both co-op and competitive, that utilized the Gamepad for asymmetrical gameplay.

First, the competitive games usually went like this– the player with the Gamepad is given some special powers, and must defeat the other players who are working together to survive. This template went with three separate games, themed after Luigi’s Mansion, Super Mario, and Animal Crossing. All three are pretty fun minigames, albeit quite similar experiences. They’re a lot like the reverse of the GBA/Gamecube game Pac-Man Vs., which had the person on TV playing as Pac-Man while up to three other players were the ghosts.

The main cooperative mode, though, was the game’s biggest hit– A Legend of Zelda: Four Swords-style action-adventure game. The game could be played solo with just the Gamepad, but it was much more fun when Olimar has several friends along to help out. It’s short, but a pretty exciting experience that acted as a good build-up to the eventual release of Pikmin 3 later on.

All of the Nintendo Land modes were nothing more than demos showing off the features of the Wii U Gamepad, but in the end not much came of it beyond that.

As far as innovative local multiplayer went, the only other game that’s very notable is another first-year title, Game & Wario, where there were four multiplayer modes, and two of them used the Gamepad in particularly special ways.

My favorite of these is the game “Fruit”:

One player, with the Gamepad, tries to steal fruit on the screen while blending into the crowd, and the other players, using the TV only, try to figure out which person the player is. It’s a blast, and for years for me it was a staple when hanging out with friends.

The other mode was “Disco”:

This is something that is doable on smartphones and tablets nowadays, but it was very fun back in the day, too, a competitive rhythm game where both players used one side of the Gamepad to send out their moves. The TV wasn’t strictly necessary, but added a good atmosphere and allowed non-players to get a more cinematic view of the action. Once again, great for parties.

Sadly, that’s about it.

There was one other game that’s worth mentioning… Hex Heroes, an RTS/Party game hybrid that used splitscreen couch co-op as well as Gamepad-centric strategy gameplay to make for a really exciting arcade-y action experience. It raised oodles of money on Kickstarter and you can see for yourself how neat it looks:

It never came out though.

That’s a pretty fitting metaphor for the entire Wii U experience.

The Switch and its emphasis on a minimalist gaming experience eliminated almost all of the features that could have enhanced the troubles with the Wii U. There are some games that require the Switch to be in handheld mode for touchscreen controls, but they are fairly rare. Otherwise, because you have to have your system plugged into the dock to play on TV, you can’t actually USE the second screen. Theoretically, you could have one console docked, another in handheld mode, and the other players with separate joy-cons, but that’s a clunky proposition, and one that I don’t think a single game has tried.

So while Project Cafe and the Wii U were a dream come true to my teenage self (almost literally), in the end, it wasn’t able to achieve what I was hoping for and Nintendo went another direction entirely. I still look back wishing that we’d get something like another Battalion Wars, or a true co-op Pikmin, or even that fabled Roleplaying Assistant game, but hey, video game suck anyway so who cares.

One thought on “The Wii U, Switch, & the Short Life of Asymmetrical Multiplayer”

I'm the Demon Lord, but All I Wanna Do is Sit Around and Eat Pizza Poppers